I went to an adult bookstore and bought some of those pulp magazines that used to flourish at such places. I was determined I was going to find an ad for an older woman looking for a young, hard cock to service, and pour out my incredible volume of semen in and on her. As I was one of thousands of single guy soldiers on the Monterey Peninsula, I was not alone in this. After a couple months, I realized this was not a useful proposition. But in the back of my mind, I kept remembering an ad that always appeared in each of the magazines I looked at.

It was an older guy in his fifties who said he was interested in jacking off younger guys, nothing more than that. I'm not a fag, I told myself, but my cock, balls, and prostate had other ideas. Besides, who would know? So I answered the ad and got a letter back with a polite introduction with a number to call. I did so and set up a time on my next day off. It actually worked out, the Army did not change my schedule and I met a guy at his home on David St. near the Presidio of Monterey.

He asked if I wanted a drink and I had a double whiskey and water, downing it quick. While doing so, he told me he had a certain way of doing things and he was not going to change. Did I understand? With that, we went out into his garage. He had a heavy type of folding chair in the middle of the garage. Just off to the side, there was a carpet remnant, with a piece of brown butcher/wrapping paper rolled out 6-7 feet and the end farthest away from me taped to the floor.

He told me to take off all of my clothes except my socks. I folded them and he had me put them under the chair. He sat down and directed me to stand on the carpet, slightly spread my legs and then face in the same direction of him as he was oriented. As I did so, I felt his hand brush my inner thighs on the way to grasping my testicles. He would tease and then massage my balls. He had a way of protruding his fingertips inside my scrotum, feeling the cord and irregularities of each testicle and grasping the base of my cock, tugging on me.

"Honey, can I meet your friend?", she asked. She did not wait for an answer and came over to my side. "You know, he likes the way you shoot so much, he has stopped seeing the others", she says with her hands on her hips. She was a little older than him. She was 5"8" and probably 140 lbs., 20 of it in her tits. She was white, had light brown ringlet hair with a touch of gray, and had green eyes. She was dressed like Mrs. Cleaver, house dress, red lipstick, heels, and apron. "Darling, can I watch you orgasm this time?" I nodded, did not say a thing.

Now I had been in the field living like an animal in South Monterey County for 11-12 days. The first thing I had done when I got out of the shower was get into my new Sentra and get to their place. I was a couple minutes from cumming when she let me know she was there, and now that I had a woman watching, I needed just a coupe dozen strokes to put Peter North to shame. She actually started to move her hand to her mouth as I blasted. Without saying a thing, she clacked on her heels back into the house.

At some point after a month or so, she did something new. After she came out and took her place standing to the side and a bit in front of me, she unbuttoned her house dress and let me catch a look at her huge breasts with silver dollar, projecting nipples. Fucking Gawd! She fondled and pinched them, putting on a show swaying side to side. And after I came, back in the house. The next new thing was cheering me on, reaching under her dress and masturbating. When this started, she would get closer and closer, at less than arms length.

A big smile came to his face.

A few here are patrons today of the Nuart Theater on Fremont in Monterey. Part 2 will be of my discovering gloryholes there and also in Salinas, CA.
Top 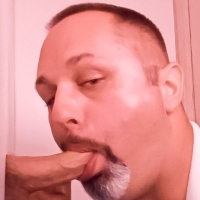 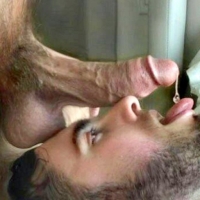 Not a member? register to join our community
Members can start their own topics & subscribe to topics
It’s free and only takes a minute